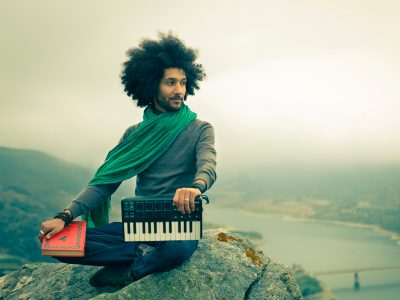 N3rdistan is a Franco-Moroccan band that [re]thinks and mixes various dimensions, times, cultures, styles and instruments. From hip-hop, rap, electro-rock to the more traditional Arabic melodies, with the voice of the disconcerting and mesmerizing Walead Ben Selim.  Old poets such as Mahmoud Darwich, Gibran Khalil Gibran, Ahmad Matar or Nizar Qabbani are sung, but also poems of their own authorship. Of disruptive intensity and power, N3rdistan performances have been praised and referenced by the press wherever they go.

N3rdistan has managed to reproduce in ناتسدرن, its first and revolutionary album, all its scenic power.